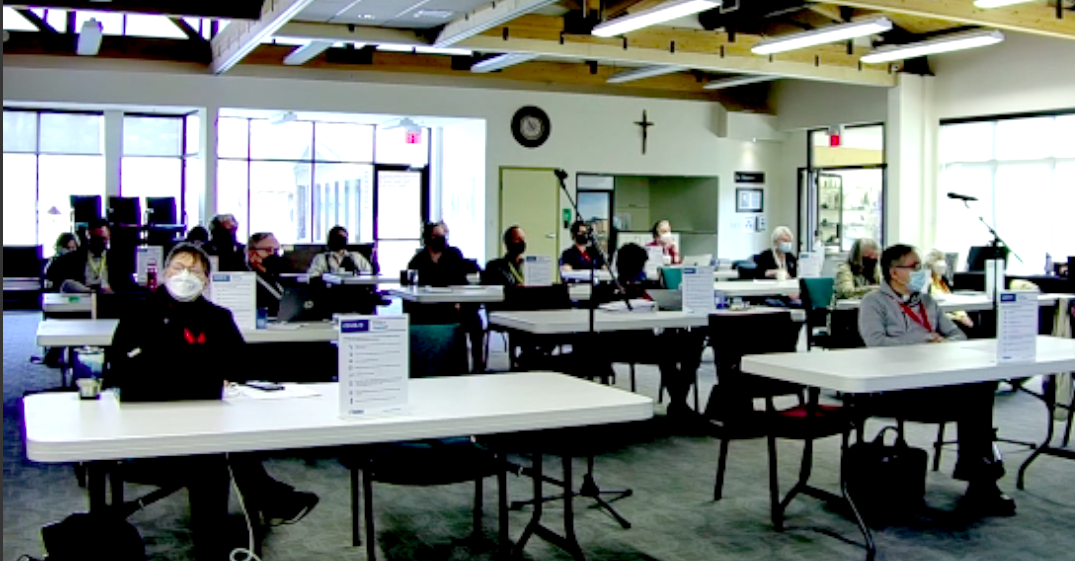 At its March 2022 meeting, the Council of General Synod spent more than 4 hours, spread across several in-camera sessions, discussing the #ACCtoo letter ~ Mar. 10, 2022

‘What happened … was gravely wrong’

The Council of General Synod (CoGS) has committed itself to improving the church’s practices in a range of areas including sexual abuse and journalistic governance in the wake of public allegations that senior church management failed to protect the identities of victims of alleged sexual assault by sharing last year an early draft of an article for an Anglican Journal sister publication.

A number of Anglicans, however—including the Journal’s former editor, one member of CoGS and the two responsible for these public allegations—say they have serious concerns about the council’s response and are calling for, among other things, the resignation of the church’s general secretary.

Over the course of three days during its March meeting, the national church council spent more than 4 hours in-camera, discussing a response to an open letter published online in February. The letter, written by a group calling itself #ACCtoo, called for action from the church to address harm it said was caused last spring when a member of General Synod leadership passed on a draft of an unfinished article to four Anglican institutions. The article, intended for the Anglican Journal’s online magazine, Epiphanies, reported on allegations of sexual misconduct related to these institutions, and, according to #ACCtoo, in its draft state it also included personal information about the complainants which tied them to the institutions and could have revealed their identities.

When the in-camera sessions were finished, CoGS’s statement was published on the Anglican Church of Canada’s website.

According to the statement, discussion at CoGS was not unanimous, though there was “broad consensus among Council members around much of the statement.”

It continues, “What happened in this case was gravely wrong. It also revealed deeper, systemic wrongs. As elected representatives from the Anglican Church across Canada, the members of the Council are determined to take action to right wrongs, when and where we can.”

CoGS’s response also states, however, that with respect to the sharing of the draft, “It is our understanding that everyone acted in good faith.”

The CoGS statement lists 13 findings and recommendations, including: a recognition of the need for independent journalism in the church, promising the completion of an internal review of the church’s journalistic governance practices to prevent any further breaches; and a recommitment to the rights of anyone involved in the church to be free of sexual misconduct and a series of promises to examine the way the church handles sexual misconduct complaints when they arise. It also contains several notes of apology and regret, both for the initial incidents of misconduct and what the report calls the “egregious error” of sharing the text of the story that identified the complainants.

In the statement, CoGS also offers to give the three who shared their stories for the Epiphanies article access to the results of an investigation on that breach of journalistic practice in a meeting with Archbishop Linda Nicholls, primate of the Anglican Church of Canada—a meeting which would need to take place, it says, “with appropriate mutual assurances of privacy and confidentiality.”

However, on March 18, #ACCtoo organizers Michael Buttrey and Carolyn Mackie posted a response to CoGS’s statement in which they criticize the council for failing to respond to the three calls to action in their initial open letter, which were: to release the unredacted findings of the investigation to the three sources’ designated representatives; to require the resignation of the church official who shared the draft of the article; and to submit an apology for the Anglican Journal to publish, in which the church confesses wrongdoing and “presents a plan of action that is a worthy beginning of repentance.”

Neither the #ACCtoo website nor the CoGS statement originally identified the church official who shared the article last year. But on March 15, when #ACCtoo posted its response to the CoGS statement, a statement by the primate went up on the Anglican Church of Canada web page summarizing the investigation report, and identifying Archdeacon Alan Perry, general secretary of General Synod, as the leader in question.

In another statement posted on the same page, Perry acknowledged harm that the sharing of the draft had caused, but did not directly refer to himself as having shared it. “Regardless of the circumstances, it happened on my watch. I regret that this sharing occurred and particularly regret the harm caused to the three sources,” his statement reads. Perry declined to comment in response to an email from the Journal requesting clarification.

In their response to the CoGS statement, Buttrey and Mackie take issue with the primate’s offer to release the results of the investigation in a meeting with the three sources, asking that the church leaders release the report before the sources agree to meet with any church official. “We believe it is inappropriate to stipulate that survivors of sexual violence and ecclesial misconduct must meet with the leader of a church and provide assurances of confidentiality before they can receive factual information,” the response reads.

CoGS’s statement recommends the report be shared with the editorial board of the Anglican Journal, as part of the process of reviewing journalistic practices among church leadership. But it does not recommend making the full report public and states that there may be valid reasons for not doing so.

In their response, Buttrey and Mackie call on CoGS to let them and the three who shared their stories view the report before it is shared with the board, to confirm that it does not identify them.

However, as of March 24, several sources told the Journal that church leadership had gone ahead and shared the report with the editorial board. According to a Facebook post by CoGS member Finn Keesmaat-Walsh, the version board members received included an appendix with information on one of the original misconduct complaints. The same day, Cydney Proctor, a signatory of the open letter, posted a video on #ACCtoo’s YouTube channel in which she identifies herself as a source in the original Epiphanies story and expresses displeasure at what she calls a further breach of confidentiality by the church. She calls out Perry for posting a statement promising not to allow such a breach to happen again, days after the document had been shared with the editorial board, and demands an additional apology from the church.

“I believe that the senior leadership of our church truly does not understand what is at stake here or the damage that they have caused,” said Proctor.

#ACCtoo’s response also takes issue with the fact that the apologies in CoGS’ statement do not assign responsibility to anyone specific. “The CoGS statement did not address accountability in any discernible form beyond a general expression of regret,” the response states, noting that the council had made no response to their call for the leader responsible for sharing the draft to resign.

In a separate email to the Journal, Mackie and Buttrey added, “Wrongs carry responsibility. More than one person may be responsible for a wrong, but not less than one … Since the statement, it is now even less clear who is responsible for this grave wrong, or if anyone will be held responsible.”

Both the email to the Journal and the response to CoGS’s statement question whether the church’s leadership is spending too much effort protecting the institution at the cost of giving enough priority to the concerns of survivors of abuse. “We believe the church as an institution is not a proper end of Christian action, but a means to achieving the ends of the Gospel,” they say in the publicly released statement.

The email to the Journal adds even more criticism, alleging that the language of CoGS’s statement and its refusal to name the person who shared the draft article serve to cloud the issue and diffuse responsibility.

In their Facebook page, Keesmaat-Walsh, a signatory of the open letter, says they did not support the statement by CoGS.

“I’m part of why the CoGS statement was ‘not unanimous.’” Keesmaat-Walsh says. “I didn’t support it because it isn’t enough.”

And on Monday, March 28, a statement by former editor Matthew Townsend, who resigned after discovering the draft article was shared outside General Synod senior management, was posted on the #ACCtoo site. In it, Townsend, among other things, adds his voice to #ACCtoo’s calls to action, and includes CoGS’s statement as an example of church pronouncements he criticizes for not addressing those calls. His statement includes a link to his May 28, 2021 resignation letter.